p/v loop, breathing diagram - A p/v loop is a way to visualise a regulator’s breathing performance by plotting the breathing pressure over the displaced volume. Most often, the breathing starts with an inhalation to the right at the x-axis, and the inhalation forms a graph ideally close to the x-axis. When exhalation starts, the graph plotter turns and goes back again on the positive side of the x-axis until the inhaled volume has again been exhaled. This then forms a “pressure/ volume loop”. The x-axis intersects with the y-axis exactly at the actual pressure at depth, and can be said to be the target regulator pressure. If both the inhalation and exhalation curve did not deviate from the target pressure whatsoever, we would have a perfect regulator, with no inhalation- or exhalation-resistance.

Norsok U-101 – Since the EN 250 standard only states- dynamic performance testing to a maximum depth of 50m, and accordingly requires a maximum approved diving limit to 50m, it cannot be used for type approving regulators capable of more. The Norwegian Off-Shore industry has established standards similar to the EN 250 which describes testing down to 400m. This standard was accepted by the noti ed body to be used to approve the  rst ever Open Circuit SCUBA regulator to be approved for use down to 200m – the Xstream.
The standard can be viewed at:
http://www.standard.no/no/Nettbutikk/produktkatalogen/Produktpresentasjon/?ProductID=132407

XSTREAM RANGE -
The objective; design the most reliable HP valve in the world. Every engineer knows the benfits of using balls in valve arrangements, since they will never be misplaced and will always end up in their perfect position. Unfortunately, varying upstream pressures will either push the ball too forcefullly into the seat or leave it unsecurely loose, giving unbalanced characteristics.

By inventing the oating seat (which automatically repositions the ball) the increased upstream pressure is balanced equally with increased and counter-acting compression forces from the pressure adjustment spring, maintaining the benefits of having a perfect ball as the sealing element. The Xstream regulator is also self-balancing, which gives the same high performance irrespective of the pressure in the cylinder. When the seat is moved upwards by the high pressure, the design causes the upper pressure spring to compress and thus exactly self-balance the powers of pressure.

Xstream also has a built in anti freeze protection in its construction. TDA (Thermo Dynamic Antifreeze) ensures that the through- flowing water keeps the ice away, entirely without fluids or extra diaphragms.

JETSTREAM - THE ULTIMATE IN RELIABILITY
Controlling the power of a massive air flow, astonishingly reaching some 2100 litres/minute is an engineering challenge. The solution to this was to obtain a precision regulation, keeping breathing pressure to within +/- 5 mm.w.c throughout the inhalation cycle, regardless of depth and demand. Called a servo-assisted valve, it works in the same way as does the power steering you may have on your car – it’s all about compensation.

Prior to diving, when you pressurize the regulator, the main blue bladder valve is in ated with the interstage pressure, along with all inner volumes including the upstream side of the servo valve.
When this is done a “swoshing” sound of streaming air is heard.

The system is then activated. On inhalation, the forces from the inhalation diaphragm easily overcome the light forces to crack open or “tilt” the servovalve and in turn evacuate all inner volumes. The main blue bladder valve then collapses and in turn lets an amount of gas out, corresponding to the actual demand.

This technology ensures that the lightest possible effort can result in an almost limitless amount of gas on inhalation.

All the more astonishing is the fact that Poseidon introduced this technology to the market as far back as 1981.

The Jetstream: traditionally popular with technical divers as well as the Swedish and US navies. An easy breathe at any depth, the second stage incorporates a safety valve that allows you to continue to breathe normally in the unlikely event of abnormally high pressure air being delivered to the second stage. Approved to EN250 cold water standard.

CYKLON - EVEN MORE EXPERIENCED THAN YOU...
A regulator must possess a set of functions which are unaffected by the different environments it will see during its lifetime. Examples of these functions include inhalation resistance, exhalation bubble distraction, noise and leak tightness – to name just a few. Different environments such as cylinder pressure, diving attitude, depth, temperature, gas, type of water, the diver can have an effect on these functions.

When a new regulator is released on the market, it has to pass the EN 250 test. This test represents one single environment; the manufacturer may have managed to test perhaps another hundred such situations, which is good but not necessarily enough. Only after years and years of actual use by divers around the world will the manufacturer collect all the information which can guarantee a perfect performance under all circumstances. This of course, takes time...

The Poseidon Cyklon Junior was introduced in 1958. In small steps, it has been gradually improved every year, based on both divers’ experiences and technological evolution. And so it continues.

The expression “been there – done that” applies to The Poseidon Cyklon more than to any other regulator on the market.

POSEIDON REGULATORS ARE MADE TO LAST
The objective; design the most reliable HP valve in the world. Every engineer knows the bene ts of using balls in valve arrangements, since they will never be misplaced and will always nd their perfect position. Unfortunately, varying upstream pressures will either push the ball too ercely into the seat or leave it unsecurely loose, giving unbalanced characteristics.

By inventing the oating seat (which automatically repositions the ball) the increased upstream pressure is balanced equally with increased and counter-acting compression forces from the pressure adjustment spring, maintaining the bene ts of having a perfect ball as the sealing element. The Xstream regulator is also self-balancing, which gives the same high performance irrespective of the pressure in the cylinder. When the seat is moved upwards by the high pressure, the design causes the upper pressure spring to compress and thus exactly self-balance the powers of pressure. POSEIDON FACT - ONE OF THE THOUGHEST
Poseidon is one of few manufactures with mouthpiece regulators approved for cold water service by US Navy.
For details go to http://www.supsalv.org/pdf/ANU.pdf 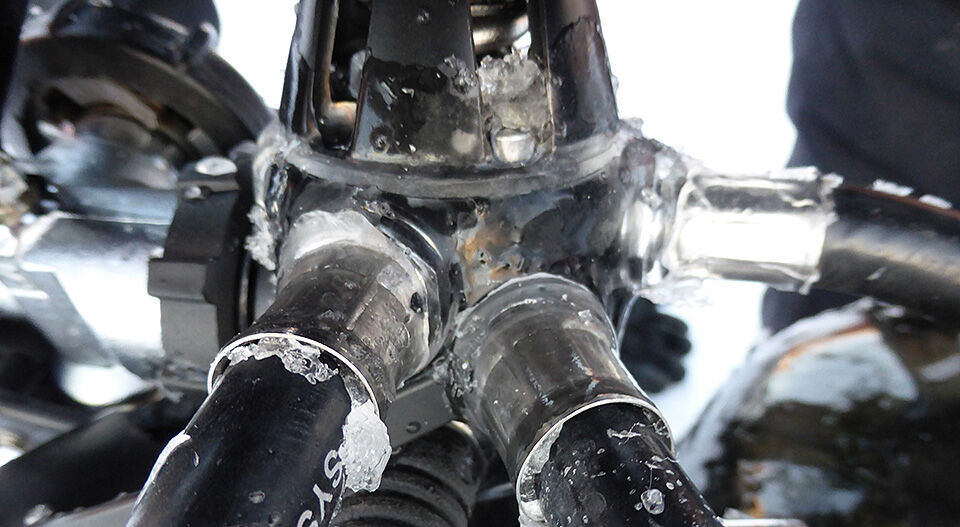 SERVO(PILOT) VALVE TECHNOLOGY
To achieve high air  ow on demand, the diameter of the supply nozzle in the second stage has to be of suf cient size: however this impacts on other aspects of a regulator’s design. This nozzle is covered by a plate or “valve seat”, which ensures that gas does not escape when not in use or during exhalation. Force is required to hold the plate in place against the gas pressure – assuming that it is a downstream opening valve seat, as is the case in most conventional regulators. It is the force required to “crack open” the valve – the inhalation effort – which divers want to keep to a minimum.
As mentioned, with the nozzle diameter “set” according to physical laws, therefore the corresponding force to seal the nozzle is also predetermined. These laws mean that to make a high performing and enjoyable regulator, the given factors would result in either a huge diaphragm to obtain the necessary forces, or a high inhalation effort.
One solution that does reduce the inhalation effort is to use a sharp edge against the valve seat – this reduces the force needed to keep the valve closed. This is not satisfactory as it dramatically increases wear. Another option is to use Venturii- effects to fool the regulator diaphragm into believing that there is a greater demand due to local under-pressure zones near the diaphragm. However this too is not satisfactory as the Venturii-effect is dependent on depth and breathing pattern which means that performance will be affected by depth which is never good.
Our solution is Servo technology. It is like power steering in a car. A servo controlled valve is basically made of two valves; one very small and one bigger. The smaller controls the bigger. By having an extremely small valve, with a correspondingly small nozzle, the forces to keep it air-tight and therefore to open it are much smaller. In addition, since the force to keep the bigger valve shut comes from the interstage pressure itself and is controlled via the servovalve, it doesn’t require sharp edged seals and it can be greatly increased in respect of outlet area to achieve very high air- ow capacity.
A common misconception regarding the Jetstream servo valve is that since the servo valve is an upstream opening valve, in case of an increased interstage pressure the servo will shut, preventing the main valve from opening.
This is incorrect. The Jetstream second stage is equipped with a safety valve in case a high pressure air ow occurs. This safety valve prevents the airstream from  owing out through the mouthpiece straight into your mouth. Instead, the construction will release the air into the water via the hose. In all cases it is possible to breathe from the second stage.

What is a breathing curve?
Have you ever thought of how you breathe? When you inhale and exhale you create something called a breathing curve or a loop. A breathing loop is also a way of measuring the performance of a regulator and is measured in Joules per litre (see picture). For example the total work of breathing might be 0,75J/l. The  gure shown in charts is normally the sum of inhalation and exhalation with an optimised regulator in a test bench, which means it does not show if the inhalation was extremely high and exhalation extremely low or vice versa.
Some regulators rely on knobs and levers to be manually adjusted. To get optimum performance out of such a regulator as you descend or ascend is extremely hard as there are many parameters to consider. Our idea is that this should work automatically.
At Poseidon we focus on inhalation resistance as breathing out is easy for the human body. The Cyklon achieves this through overall design and the Jetstream and Xstream by servotechnology. The servo valve is unaffected by depth or what pressure it has to work at, as the force required to open it is extremely low. Next time you ask about a regulator’s breathing curve ask them about inhalation resistance and if the regulator adjusts this automatically so that you don’t end up being the regulator. Either way, it leads to a more stable performance and higher regulating precision.